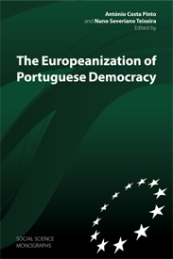 This book analyses the Europeanisation of democracy in Portugal between the Carnation Revolution in 1974 until about 2010. Portugal has recently come to the forefront of debates on European integration because it has been one of the countries most severely hit by the Eurozone crisis. By contrast to Greece, it has been presented as a rather “good pupil” in the implementation of austerity measures imposed by international financial institutions. However, the academic literature on this country and its relationship to European integration has been rather scarce, and this book is therefore a welcome contribution to a better understanding of the role of European integration in Southern Europe.

The book contains nine chapters dealing with the interaction between European integration and democratisation, the attitudes of political elites towards the EU, the Europeanisation of executive power, of the Parliament, of courts, of interest groups, and of public opinion. The general picture which emerges throughout the chapters is that of a mutually reinforcing dynamic between democratisation and European integration. After the fall of the dictatorship, European integration was seen as the means to definitively part ways with the authoritarian past, stabilise the parliamentary system after the years of turmoil that followed the revolution, and modernise an economy whose structures had been shaped by a huge colonial empire. As a whole, democracy and European integration appear as “brothers in arms”, as emphasised in Vink’s closing chapter.

Many of the contributions provide valuable insights into the workings of the Portuguese political system. However, the book generally gives a fairly dated impression in the light of recent events linked to the crisis, like a book on the GDR that would have been printed in the summer of 1989. Even if the publishing cycle may certainly be responsible for this, there are very few explanatory elements throughout the chapters that could help explain current events, set aside the introduction by Nuno Severiano Teixeira highlighting the decade of divergence that preceded the crisis, or Pedro Magalhães’s chapter showing the decline in popular support for European integration. In many ways, it seems that the strong enthusiasm for European integration emphasised in the book has concealed deeper politico-economic logics that are only superficially tackled. As the harsh austerity measures recently implemented by the Portuguese government have been essentially justified by the fact that “there is no choice” in the face of EU commitments, the relationship between European integration and democracy in this country now seems much less positive.

To be published in Political Studies Review.