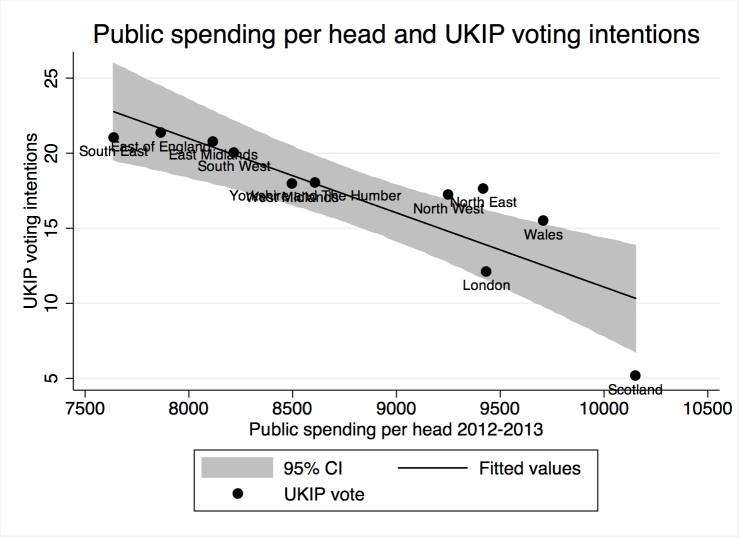 In their manifesto published yesterday, the Conservative party have pledged to increase funding for the NHS by 8bn a year, besides other policies that have been criticized for for not being clearly funded. Many observers have argued that all these spending increases will need to be be compensated somehow by deep cuts in other domains, such as the welfare budget, where 12bn are to be cut by 2017-2018. In this respect, the Conservative party will be continuing the policy of reductions in public spending which some believe will lead to levels unseen since the 1930s. Now another thing that the Conservatives want, it’s to prevent the rise of UKIP. Can these two things be reconciled? In the graph above, I have plotted together public spending per capita in 2012-2013 (from here) and UKIP voting intentions from the British Election Study. There is a surprising level of fit (72% of the variance explained), and the clearly negative relationship holds if we control for unemployment (data here: UKIPSpending). The less public spending there is, the more UKIP support there is. Basically, if one were to assume that this relationships was causal, it would “cost” 200 pounds of increased spending per capita to reduce the UKIP vote by 1%. I am not sure whether this fits in the long term economic plan.