Projecting the second round of the French presidential election

I have used this data and polls to project possible voter flows between the first and the second round in the different scenarios. Basically, I have taken the current poll numbers of the candidates and reallocated their share of the vote to the two candidates in the second round based on the report.

Now, this should be considered with a pinch of salt because one has to make a lot of – sometimes quite strong – assumptions. First, I assume that polls are accurate, and the level of support of the different candidates in the first round will be close to the real first round result. Second, I assume that voters of a successful candidate in the first round will stick with them in the second one, and none of them switches or abstains. Third, since people were given the opportunity not to express a preference, I assume that the people without a preference will abstain. This is not realistic and surely overestimates abstention, but the lack of preference surely signifies that there is no likable alternative for these voters. Fourth, and most importantly, these were scenarios presented to voters before they knew who is actually in the final runoff, and preferences may change once the choice before them becomes real. But this gives an overview of how “likable” the different candidates are beyond their own electorate, which is crucial to win a two-round election. Amongst the potential candidates, Macron and Mélenchon seem to have the broadest appeal beyond their own electorate.

I have built a series of Sankey diagrams that present these voter flows in the different scenarios. In brackets, the poll numbers for the different scenarios as given by Ipsos. The numbers in the graph include abstention, so the share of the vote for each candidate is given as a share of the electorate, not of valid votes. One problem is that abstention is not factored in in the first round, but the numbers are only given for people who “are sure they’re going to vote” (people tend to overestimate this). Also, “small” candidates like Philippe Poutou and Nathalie Arthaud are not in the poll, but the vote transfers from these candidates are small anyway. 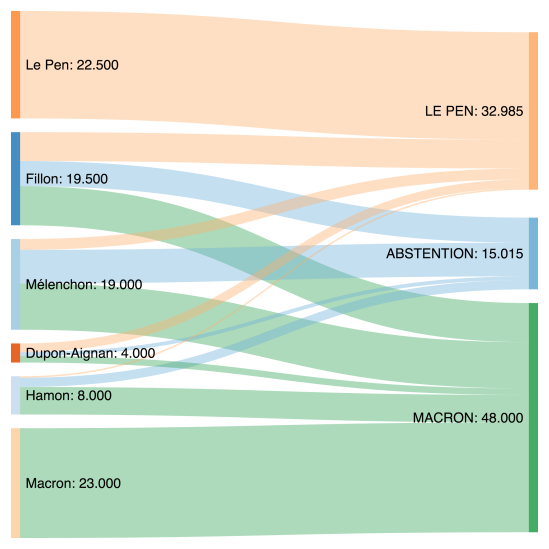 The biggest addition to the Le Pen vote in a duel Le Pen-Macron would come from Fillon, but an even greater share of the Fillon voters say they would vote for Macron. Macron has the big advantage of drawing from left, right and center. 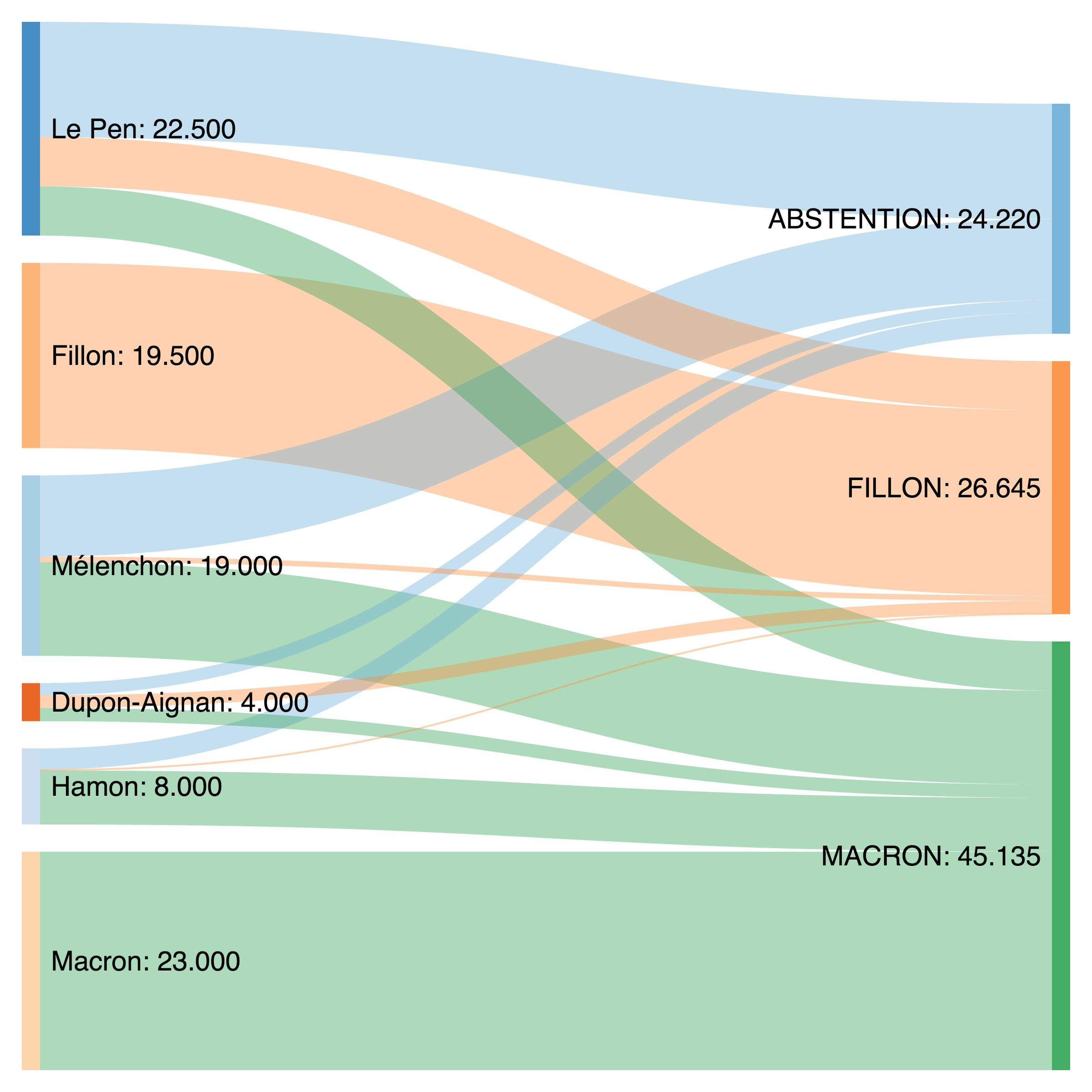 Fillon is a very weak candidate against Macron because he doesn’t draw any votes at all from the left. Mélenchon and Hamon voters loathe him, and the share of Le Pen voters going to him is not big enough.

Fillon-Le Pen is the tightest race against Le Pen. Fillon would still win, but he is very unpopular among Mélenchon and Hamon voters (a bit less among Macron voters). Because there is no left candidate, this is the race that in theory produces the most abstention (a large share of Hamon and Mélenchon voters don’t express a preference, meaning that for them, Fillon or Le Pen doesn’t make much of a difference). This is quite different from 2002, where Chirac’s more centrist position was less of a repellent for left voters. 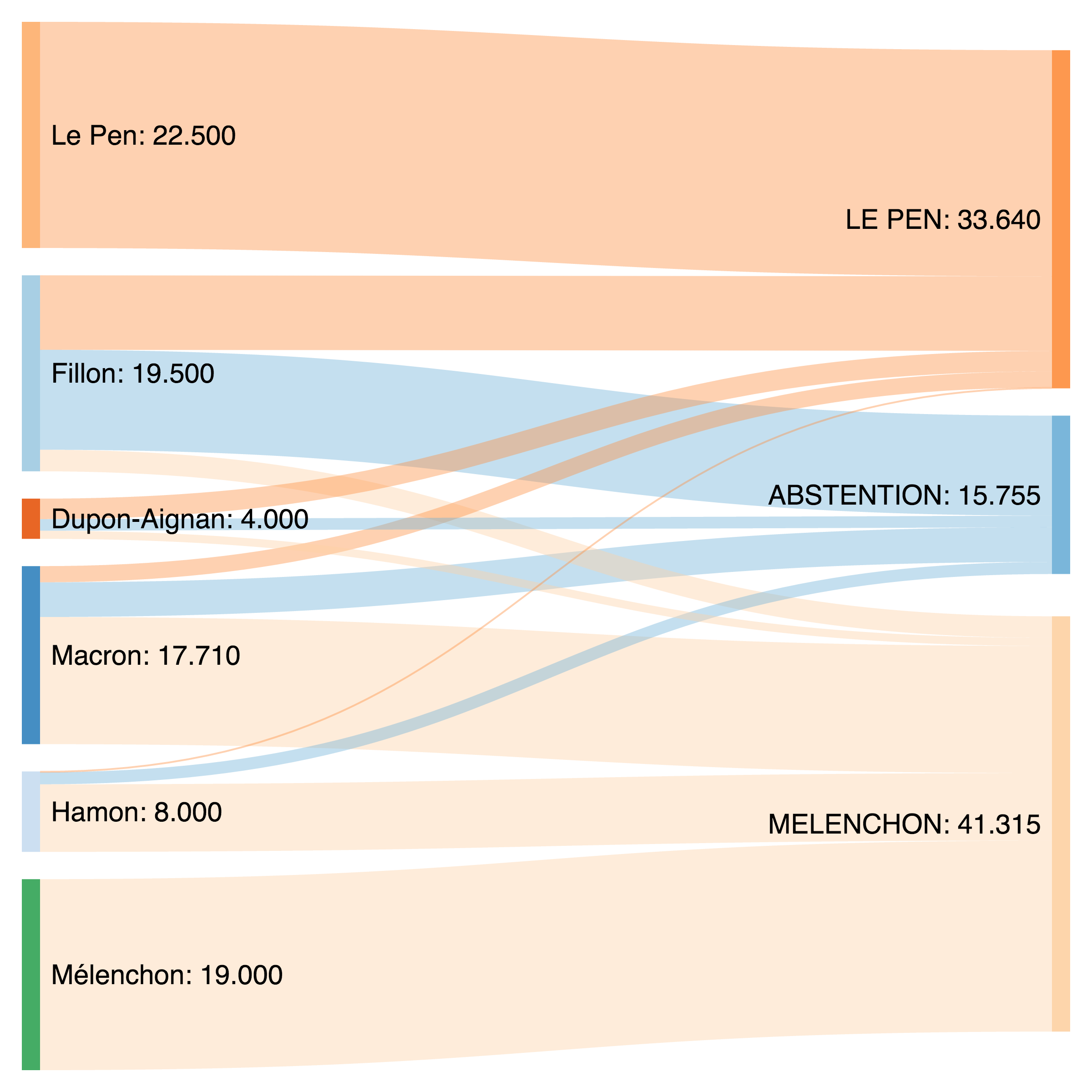 Mélenchon-Le Pen is the most polarised race. Mélenchon would win by drawing on his good standing among Macron and Hamon voters, even if he doesn’t get many votes from the right (Fillon). Le Pen, again, could only draw from a transfer of votes from Fillon. It would be too small to beat Mélenchon, however. 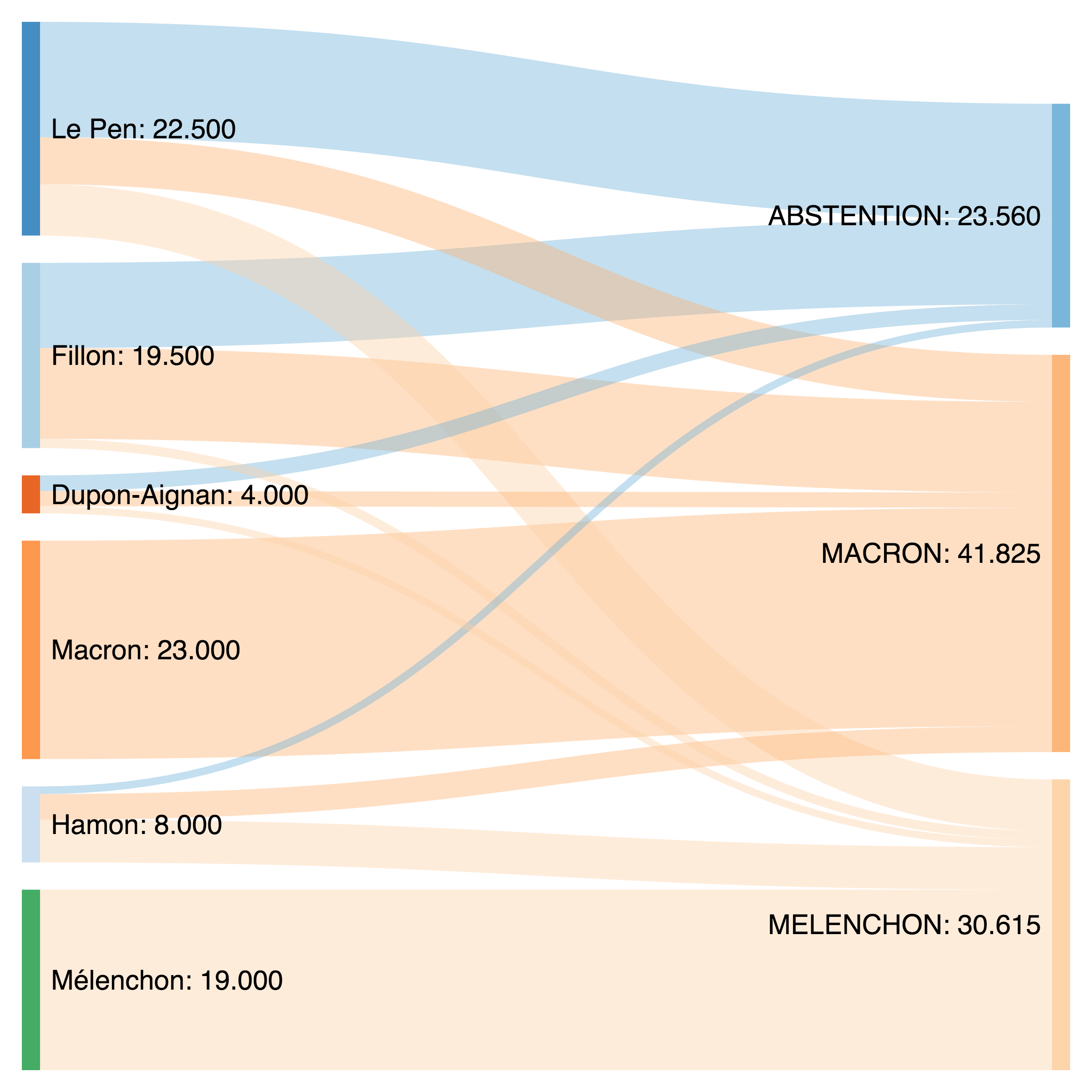 Mélenchon is actually quite popular among Macron voters, would draw on almost all Hamon voters, while Fillon only appeals to his own base and some Le Pen voters. As things stand, Mélenchon would beat Fillon even if he is currently polling behind him in the first round.