A map of terrorist attacks in Western Europe, 1970-now

The global terrorism database at the university of Maryland has geocodes for all terrorist attacks around the world since 1970. Using plotly, the maps below show the location of terrorist attacks across decades; the size of the bubble indicate the number of people killed. A few remarks: the 1980s were by far the worst in terms of the number of people killed in terrorist attacks, the IRA and the Lockerbie bombing accounting for a large part of the victims. Terrorism severely diminished in the 1990s, with a resurgence after 2000: The Atocha bombings in 2004, the Breivik attacks in 2011, and now the Paris and Brussels attacks. 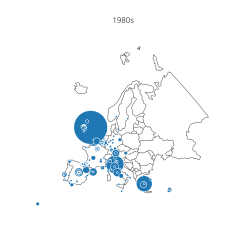