Emmanuel Macron and Marine Le Pen will be competing in the election run-off of the French presidential election on May 7th. It is fair to say that Macron and Le Pen propose completely opposed views of what France should be. Macron is a liberal cosmopolitan, is pro-EU and wants to relax employment protection, and Le Pen is a nationalist who champions a stronger role for the state. In recent work we have done with Line Rennwald, we found that the Front National had been the European Party that had moved the furthest to the left when it came to welfare state issues, at least when it came to its agenda (what they actually do is a different story). 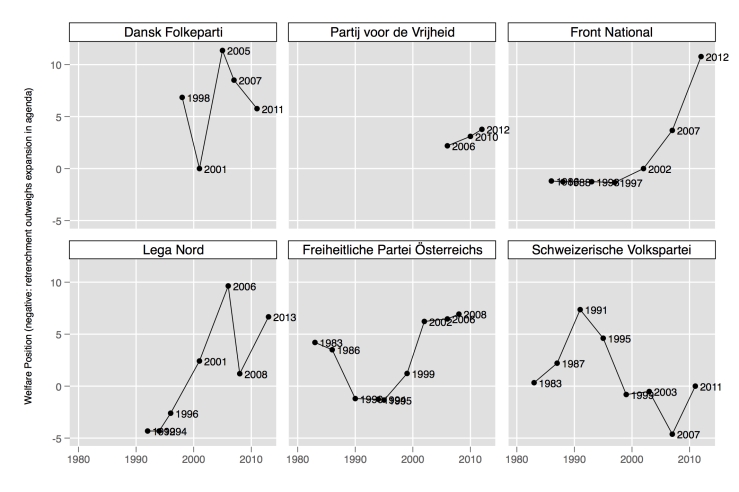 In line with this, the social classes that they appeal to are also completely opposed: Le Pen does the best among blue collar workers, while Macron is the most popular among managers and what sociologist call “socio-cultural professionals”, people in the creative industries, doctors, lawyers, intellectuals, and upper social categories (definitions for French categories are here). In 2002, Jacques Chirac had claimed that he represented “La France d’en bas” (France from the bottom) and not “La France d’en haut” (France from above). If we look at socio-economic categories, Macron is the candidate of the “France d’en haut”, and Le Pen the candidate of the “France d’en bas”.

Using electoral results data from the 1st round combined with socio-economic data on electoral districts (n= 551)  gathered by the French National Statistics Office, we can get an idea of how the Le Pen and Macron votes related to the social composition of districts, and notably the share of manual workers and socio-cultural professionals. I have run a few simple regressions to look at this. An obvious problem in this kind of analysis is that one risks making ecological fallacies: with socio-economic data at the district level, we don’t actually know who votes for Le Pen or Macron. But it can still give some useful information. 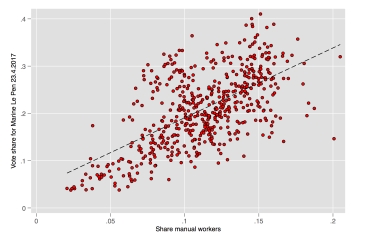 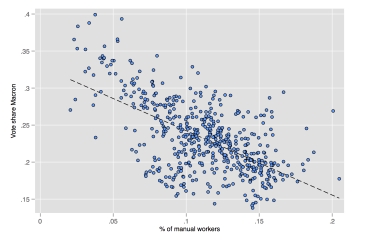 If we look at the social category of managers and socio-cultural professionals (the core base of the Macron electorate), or what we call “les cadres” in French, this relationship is reversed. The greater the proportion of cadres in an electoral district, the greater the Macron vote share, and the lower the Le Pen vote share. 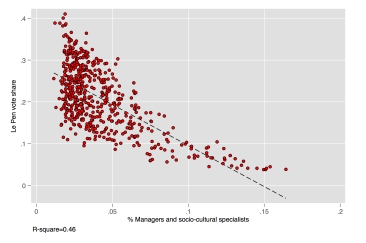 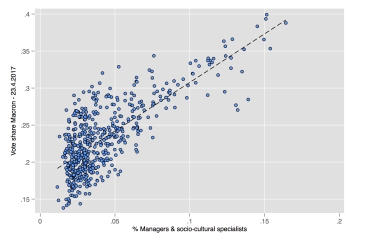 Another way to look at this not to look at vote shares, and look at how the social composition of districts affects the probability of one candidate winning over the other. For this, I have created a dummy variable that captures who between Le Pen and Macron wins in electoral districts. The graphs below show how this probability evolves at different shares of working class voters in an electoral district. Logically, the probability to win increases with the share of working class voters for Le Pen, and decreases for Macron. 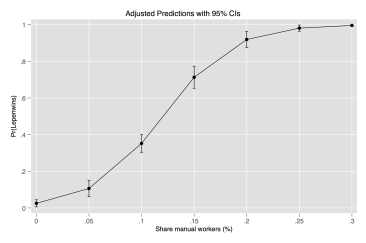 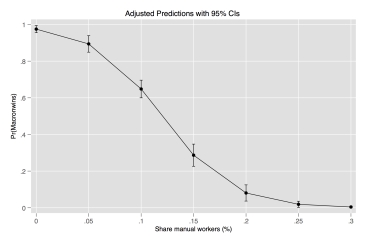 Finally, we can also look at the relationship between economic indicators such as unemployment and the vote shares of the two candidates. I couldn’t find data at the district level, so we can use the level of the department (France’s main administrative division). There is a positive relationship between unemployment and the vote share of Marine Le Pen (R= 0.58), and a negative one for Macron (-0.59) (N=102). 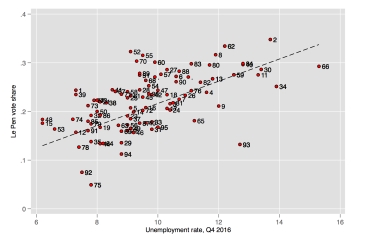 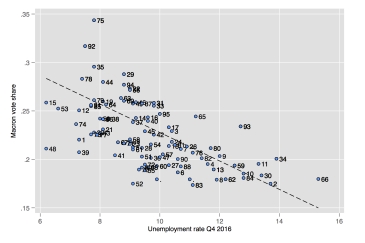 In the table below, I have regressed Le Pen and Macron vote shares by the socio-economic variables mentioned above, controlling for the share of foreign citizens per district. Data from INSEE only include people who do not have French citizenship and not French citizens of foreign descent. Not controlling for anything else, the effect of the share of immigrants is pretty small, (r-square 0.05 for Macron and 0.17 for Le Pen; not shown), but its coefficients are negative for both in the overall model, meaning that greater shares of foreign citizens mean lower vote shares for both candidates.

View all posts by alexandre afonso